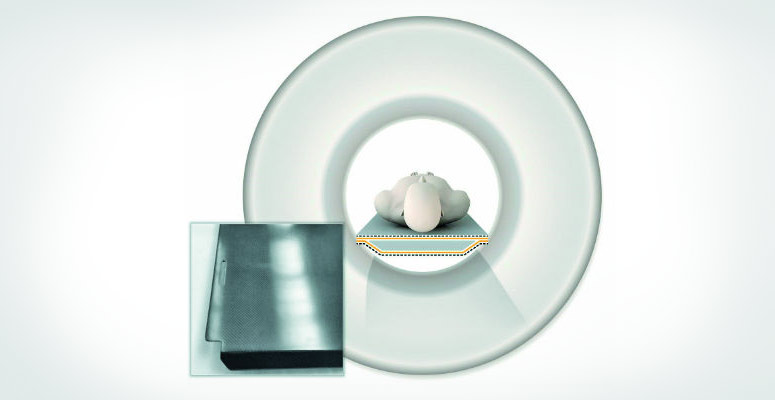 In addition to the known material properties, materials made of carbon fibres are also ideally suited for use in the field of medical technology. Because CFRP, with its X-ray transparency and rigidity, opens up many applications in medicine. X-rays are hardly absorbed by CFRP. Carbon fiber composites are therefore particularly suitable for components of CT systems or particle accelerators: Due to their high transmissivity, there are no effects that could impair imaging. With special resins as matrix, CFRP components sterilizable at 150°C can be realized. Composite materials are physiologically harmless, biocompatible and corrosionresistant.

In orthopaedics, radiolucent, low-distortion insertion guides made of CFRP are used to position implants. CFRP with its high strength is also suitable for spreaders for surgical procedures or components for the external fixation of bone fractures.

The weight and volume advantage over conventional materials and the magnetic neutrality of the carbon materials create new possibilities in handling and effectiveness – for example in navigated surgery, which takes place under constant imaging control by CT or other X-ray procedures.

An example of a manufacturer in this field is Trumpf Medizin Systeme GmbH & Co. KG in Saalfeld, Germany. Their product range focuses on modular operating tables. Used in combination with computer tomographs or C-arms for X-ray imaging, the parts used must be X-ray transparent. Managing director Dr. Klaus Frank says: “Therefore the entire body of the tables is made of CFRP. And Production Manager Sandro List emphasizes: “In addition to Xray transparency, the weight of the component is of course also important. As there are accessories or components in addition to the tabletop that dock onto the main components of the table systems, it is important that they are lightweight. Patient weights are increasing. With CFRP, the stability and strength of the overall system is guaranteed. “This mix of low weight and high stability is crucial for us,” says List. But we also pay particular attention to the surface quality of the carbon. “The surface must be smooth and clean, because for hygienic reasons there should be no scoring or scratches in the material”.

Medical technology is a growing field of application for fibre composites. In addition to high strength and rigidity and low weight, other important properties of CFRP are valued here, such as biocompatibility.

The material has therefore already found successful applications in medical technology, for example for high-tech prostheses. The horizon of medical technology solutions extends much further: all applications that are used for the patient’s recovery and are not drugs are eligible. The solution potential thus covers all disciplines from prevention to diagnosis, therapy and rehabilitation.

Due to many positive product characteristics, such as the typical lightness, stability or design freedom, CFRP is clearly a material to which the future belongs. The challenge now is to find innovative applications that go far beyond the examples given so far. In an increasingly ageing society, this is a real challenge of great entrepreneurial and economic importance.

Whether eye lens, intubation tube, disposable syringe or cannula: more than half of all medical products manufactured worldwide are already made of plastic. But even beyond these mass-produced articles, the opportunities for polymer materials in medical technology are good. It is a rapidly growing market that will remain expansive and lucrative as the world’s population grows, life expectancy rises and the demands on health care increase. At the same time, it is an area that is under constant pressure to innovate due to the often extremely short life cycles of its products.

However, it has taken some time to build up acceptance. In the middle of the last century, around 1950, only 1.5 million tonnes of plastics were produced worldwide. But in the years and decades that followed, things went uphill. Today, some 280 million tons are synthesized as a polymer alternative at sites all over the world. Demand will continue to grow in line with the increasing population of the world. Europe currently accounts for about one fifth of global plastics production. After China, the European continent is the second largest supplier of plastics, ahead of North America and the other countries in Asia and the Middle East. Of the approximately 47 million tonnes of plastic processed in Europe, almost 40 percent goes into packaging, 21 percent into building construction and civil engineering, only 8.3 percent into the automotive industry and 5.4 percent into the electrical and electronics industry. The remainder is distributed among various sectors such as sports and leisure, toys, household, furniture, agriculture and, last but not least, medical technology. Precise figures on the percentage share are not currently available. However, CFRP is well represented as a technically sophisticated and correspondingly high-quality plastic sorting material.

Problem to be solved

Not everything always goes smoothly: Sometimes problems occur when handling polymer materials. For example, it has been shown that implanted artificial knee joints cause undesired wear and tear. Abrasion occurs at the plastic insert (usually made of PE) between the metal components due to the heavy load. As the “Deutsches Ärzteblatt” (German Medical Journal) writes, this abrasion continuously loosens up the smallest particles suspected of promoting long-term bone resorption in the area surrounding the implant. In addition, a current research project at the University of Heidelberg has shown that particles are also released from the metal surface. Intensive work is therefore being done to prevent the registered wear of the implants by using CFRP elements on the contact and friction surfaces.

And if at the beginning of the last century the many invalids of the First World War were still mainly fitted with wooden prostheses, by the middle of the 20th century at the latest plastic is increasingly being used for the production of artificial limbs. Currently, complex composite structures made of plastic and carbon fibres (CFRP) are used, among other things, to make even unusual prostheses such as those used by the exceptional South African athlete Oscar Pistorius.

The trend towards lighter components

The demands on a plastic designed for medical technology have always been high, but they have tended to increase in recent years: In addition to high resistance in contact with chemicals (including the often very aggressive cleaning substances used in this environment), sterilizability and good optical quality, processability (injection molding, extrusion, joining) is an important criterion. New requirements result from the continuing trend to save material and weight in medical technology products without compromising their high quality standards.

The increasing life expectancy of people in industrialized countries is setting new priorities: As a result of the associated health restrictions of an increasingly elderly population, implant medicine and regenerative medicine are coming to the fore. Worldwide, for example, an estimated 4 million stents are implanted in the most diverse vascular systems.

And in all cases and for all these medical systems, surrogates and implants, plastics are needed – not just any plastics, but specific, biocompatible, physiologically harmless types. At the VDI congress “Plastics in Medical Technology” in spring 2012 in Friedrichshafen, a contribution from the University of Hanover emphasized that the selection of the appropriate material in biomedical implant technology can be problematic. Two criteria must be brought to a common denominator. On the one hand, a biocompatible material selected for this application must not harm the organism, and on the other hand, the material in question must not be affected by the biological environment.

Medical technology is now also increasingly using modern product development methods such as rapid prototyping (RP) or rapid manufacturing (RM). This is because the speed of innovation in this field depends largely on the rapid production of genuine functional parts for prototype construction. With RP, the first sample components up to prostheses are created from existing CAD data. The series parts are then produced in the RM within a very short time without tools from a wide variety of materials such as fibre-reinforced plastic. The consistent application and integration of these advanced processes will also contribute to the continuously growing acceptance of fiber composites in medical technology.