Fibre composites in the aerospace industry 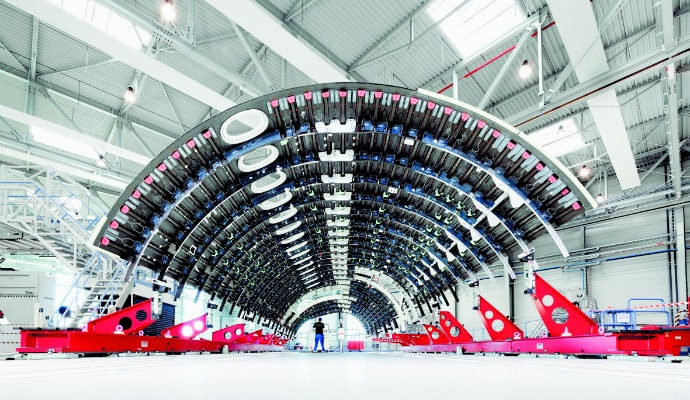 Fibre composites consist of reinforcing fibres (short, long or endless) and a plastic matrix (thermoplastic or duroplastic). The matrix surrounds the fibres, which are bound to the matrix by adhesive or cohesive forces. Fibre-plastic composites have high specific stiffness, corrosion resistance and strength at low weight. The mechanical and thermal properties of fibre-plastic composites can be adjusted via a large number of parameters.

In addition to a large number of demanding tasks, aircraft manufacturers currently have to solve the energy and CO2 problem as a matter of priority. With the most successful approach today: lightweight construction and thus the use of lightweight, highly rigid materials that meet all aeronautical safety requirements. And today, these are mainly carbon fiber composites.

The Grob company, on the other hand, built the first motor glider made of GRP. The engineers of Grob Aircraft AG designed it and it was manufactured in Mindelheim. The development of the aircraft, which is no longer manufactured, began in 1979 and initially received type certification as Grob G109A in 1981.

Boeing and Airbus began to test and install the first CFRP components in various models in the early 1970s. The Dreamliner and the A350 are the current highlights with CFRP components accounting for 50 percent and more.

Gain for the environment

Since 1990, German airlines have reduced their fuel consumption per passenger per 100 kilometers by 42 percent. This is impressive, because in 1990 this figure was still 6.3 litres. In 2013, the German airlines’ fleet – also as a result of weight reduction – will consume an average of only 3.64 liters per passenger for this route.

The overriding objective of the developers: to determine the lightest but most suitable material for all assemblies and components. The new Airbus A350 consists of 52 percent fiber composites, 20 percent aluminum alloys, 14 percent titanium, 7 percent steel and 7 percent other materials.

Glass fibre reinforced plastics have become firmly established in aircraft interiors, and carbon fibre composites (CFRP) have become firmly established in the fuselage. In the case of the Airbus A380, this figure was initially 22 percent, while for the Boeing 787 (Dreamliner) it is now already 50 percent. For the A350, the figure will be increased again to 52 percent. So this development began with the A380. The vertical and horizontal stabilizers, landing flaps, slats and ribs in the wings, the pressureless rear fuselage section and the pressure dome as well as the wing center box were made of CFRP. The weight saving, depending on the respective location: 20 to 50 percent compared to conventional construction. In addition, there are significant advantages over aluminium in terms of fatigue, thermal expansion and corrosion resistance.

First step of this development: fuselage constructions with hybrid structures. They consisted, for example, of a CFRP outer skin with aluminium frames or combinations of CFRP outer skin, titanium sheets and CFRP stringers. Other materials were used for the floor, window frames and cabin doors.

Then, semi-finished products made of continuous fibres in a thermoplastic matrix – organic sheets – were and are used more and more frequently. They can be formed and joined like metallic sheets. Due to the high fibre content and degree of orientation, they absorb significantly more energy and allow weight savings of over 50 percent compared to aluminium. They are also very stiff and corrosion-free. They can be formed using thermoforming processes. For this purpose they are heated to the melting temperature of the matrix and then formed into the desired shape under low pressure. The tools for deep drawing are cost-effective. There are also no additional costs for corrosion protection.

Most of the high-performance fibers (HT/IM) used today for CFRP-based structures are produced from polyacrylonitrile by pyrolysis under inert gas. They have a high tensile strength. A distinction is made between low-filament and multifilament yarns (HeavyTow), which are the most cost-effective to produce.

The coarser yarns are used, for example, as reinforcing fibres for flat components. In aircraft construction, resin pre-impregnated yarn sheets or fabrics (prepregs) with a low or medium weight per unit area are used and mechanically deposited in the moulds.

The depositing speed of such fiber placement and tapelayer machines has increased continuously in recent years. However, the production of large fuselage or wing shells still takes several days. The machine manufacturers are working on increasing the depositing rates from today (10 kg/h) to about 100 kg/h.

After depositing the pre-impregnated fibres, the components are cured in an autoclave at defined temperature and pressure (+/- 180 °C and approx. 10 bar).

Up to now, CFRP can only be used in those areas where the ambient temperature permits. In the front segment of the engine, for example: fan module or parts of the housing are increasingly being made of fiber composites. Weight advantages, high strength, long service life and reduced costs speak for these materials.

Compared to series production in the automotive industry, the quantities and cycle rates required in the aviation industry are smaller. For cost reasons, however, the processes must be made more efficient and quality must be increased in the future. A higher degree of automation is therefore essential. The lightweight construction potential of the materials used must be optimally exploited and their design possibilities fully exploited. Production processes for highly integral, near-net-shape components that do not require postprocessing and can be assembled cost-effectively are required.

At present, there are many fields and set screws in research and production engineering that are developing approaches to optimize series production:

Development of new resins: The search is on for resins with higher viscosity for more strength and crack resistance of the material.

Faster curing: Research is being conducted into methods that enable faster results, such as those obtained in autoclaves. Microwaves and the induction process are being tested.

Automation: The extended use of robotics and the perfection of the automated placement of textile preforms – the Fiber/Tape-Placement – have a high, cost-reducing potential.

New joining techniques: The search is on for new ways of joining structural parts, with bonding being the main focus of interest.

Advantages of CFRP for aviation

When masses are moved, weight savings contribute significantly to higher efficiencies. CFRP has an effective lightweight construction potential. With an optimum design that is in line with CFRP, this material can achieve a weight reduction of up to 70 percent compared to steel and up to 30 percent compared to aluminum.

In addition, the load-compatible arrangement of reinforcing fibers in a plastic matrix opens up new dimensions in design. A further advantage is that by taking into account the actual loads occurring in the component, the material can be used in a way that is appropriate to the stress, thereby further reducing the structural weight.

Airbus and Boeing dominate civil aircraft construction as systems manufacturers. They are considered to be the driving force for the entire industry. The core competencies of the German Airbus are the production of fuselage, fuselage structures and cabin equipment. Premium Aerotec GmbH (a CU member), which emerged from EADS/Airbus, is now a leading global structure manufacturer, has a high level of CFRP expertise and is a first-class supplier in this field. In the field of cabin equipment, Diehl Aircabin GmbH operates globally and with great success. German SMEs are internationally regarded as highly specialized and innovative and occupy strong positions in their respective supply chains.

The aerospace industry is an important high-tech sector in Germany. In 2012, the entire sector generated sales of 28.4 billion euros (an increase of 10.3 percent compared to 2011), thus further enhancing the continuous growth trend of recent years. The number of employees in the companies in the sector also continued to rise, with a total of 100,700 people (+3.4 percent) employed in the sector in 2012. Approximately two thirds of the turnover and employees are accounted for by the civil aviation sector.

The commercial air transport market will continue to grow. The volume of air traffic doubles approximately every fifteen years. By 2030, Airbus expects about 28,000 new passenger and freighter aircraft worldwide, an average of over 1,400 per year. In order to limit the increase in kerosene consumption, greenhouse gas emissions and noise pollution resulting from this growth, those responsible in industry, science and politics have agreed on the following goals within the framework of the Advisory Council for Aeronautics Research in Europe (ACARE): In 2020, a commercial aircraft should emit 50 percent less CO2 and 80 percent less nitrogen oxides (NOx) and cause 50 percent less noise than in 2000. However, this can only be achieved if the use of lightweight materials such as CFRP is further and consistently promoted.

Composited United e.V. is a network of companies and research institutions that covers the entire value chain for fiber-based, multi-material lightweight construction in Germany, Austria and Switzerland. There are also international representations in Belgium, Japan, South Korea, China and India.