Fibre composites in the automotive industry 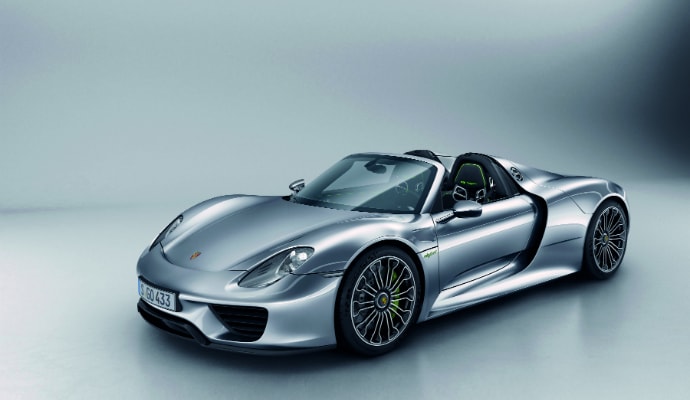 The overriding requirements for the automotive industry are by all means comparable with those for the aviation industry. Manufacturers are confronted with strict legal requirements to limit consumption and emissions. In addition to massive efforts to optimize engines and their
management, the most promising strategy for complying with these regulations is currently considered to be reducing vehicle weight. The means of choice: consistent lightweight construction.

According to the corresponding EU regulation, the CO2 emissions of newly registered passenger cars from one manufacturer may not exceed 130 g/km on average over the entire model range from 2012. A limit value of 95 g/km CO2 for all new registrations is specified for the year 2020.

Around 85 percent of total greenhouse gas emissions are generated during operation. 36 percent of these are caused by the weight of the vehicle.

As a rule of thumb: 100 kilograms of weight reduction will result in a fuel saving of about 0.3 to 0.5 liters per 100 kilometers. And that in turn means that eight to twelve grams less CO2 are released per kilometer driven.

The electrification of the drive train and the development of new electric vehicles would be the second way to reduce emissions. With its strong automotive industry, Germany wants to become the leading market and leading supplier for electric mobility. By 2020, one million electric vehicles should be on German roads. The main problems here are the limited range and heavy batteries. Here too, manufacturers are focusing on lightweight construction. This is because lighter vehicles can either continue to drive or be equipped with a larger interior or a higher payload.

Carbon composites in the automotive industry

Superior mechanical properties ensure that fibre composites will be used even more extensively in future as lightweight materials in vehicle construction. They are increasingly making a name for themselves as an alternative material for heavy-duty structures. They are increasingly replacing even high-strength steel or aluminum and its alloys. With their anisotropic properties, continuous fibres can be arranged in a targeted manner in the matrix, resulting in particularly high tensile or compressive strength in the direction thus defined. If the fibres are used optimally in the load direction, this also reduces the amount of material used. Thermoplastic CFRP can be easily formed and combined with other materials to form hybrid materials.

The development and realization of efficient series production processes for CFRP are decisive for the broad application of this material in automotive engineering. This is because the findings from the aerospace industry cannot be directly transferred to the requirements and cost structures in automotive engineering. High cycle rates and short, efficient value-added chains are the main focus here.

And of course the material costs. According to a forecast by McKinsey, the costs of CFRP will approach the level of aluminium by 2030. While aluminium could then be about 40 per cent more expensive than steel, the additional costs for CFRP under favourable conditions should be only 90 per cent instead of the current 570 per cent compared to steel. According to Roland Berger calculations, a cost reduction of 30 percent compared to today’s level will be achievable for a CFRP component by 2020. This includes the 40 percent reduction in process costs. In a forecast without a precise timeframe, Volkswagen even assumes that process costs will be reduced by 90 percent for mass production, so that together with material and paint costs, CFRP materials will then be two thirds cheaper than today.

Resin injection processes, and in particular resin transfer molding (RTM), are considered particularly promising for a wider use of CFRP in vehicle construction in large-scale production. For this purpose, continuous fibres are first arranged as a multi-layer scrim, heated and formed into the later component shape. These preforms are then placed in the mold of the RTM press, into which the resin is then injected with the other reaction components. The reaction mixture permeates the fabric and cures to form the matrix. To accelerate this process, the resin can be injected at high pressure and the press can be evacuated additionally. In principle, cycle times of a few minutes can be achieved with the RTM process, depending on the curing time of the matrix material used and the degree of automation of the process chain. In order to be able to produce CFRP components in large quantities in the future, the RTM technology is continuously being further developed, including by CU member Krauss Maffei.

BMW produces CFRP roofs for the M3 and M6 models in a production line in Landshut. At 4.5 kilograms, the CFRP roof that is now in series production for the M3 weighs less than half the weight of the conventional steel vehicle roof. A further advantage is that it is very torsionally stiff. Currently, about 50 roofs are produced per day. With simpler component geometries, today’s production plants can produce up to 100,000 CFRP components per year, depending on the production process used. This is a necessary step forward that needs to be taken even further, considering the production figures targeted by BMW for the i3 and i8 electric vehicles.

In the MAI Carbon cluster of excellence funded by the German Ministry of Research (BMBF), lightweight construction properties of carbon fibre reinforced plastics are to be made available for industrial use in various fields of application by 2020. In a large number of projects – from material production to manufacturing and recycling – the focus of interest is on the development of production-ready manufacturing methods and the development of efficient processes, research into alternative raw materials and the closing of material cycles. The new development of purely electrically powered vehicles, which are not based on existing models and platforms of cars with combustion engines, is also a focal point here. The elimination of the combustion engine, transmission and exhaust tract, as well as the need to integrate new functional units such as the battery and electric motor, opens up new scope for designers along the entire value chain.

The technical exchange at the pre-competitive level takes place between the German car manufacturers in the CU, of which all the OEMs mentioned are members.

State of the art today and tomorrow

CFRP materials have so far frequently been used in motor sports, tuning applications and in vehicles in the upper price segment – but are still rather rare in the segment of large series vehicles. This is due on the one hand to high material costs and on the other hand to the lack of production-ready manufacturing processes. The development and realization of efficient series production processes for CFRP therefore form the decisive prerequisites for the broad breakthrough of this material in automotive engineering.

However, CFRP materials are considered to have great future potential as lightweight materials in series production vehicles. In particular, composite materials with a high proportion of carbon fibers are an alternative material for highly resilient structures. Up to now, these have mainly been realized with steel or aluminum. The continuous fibres can be arranged in a specific orientation in the plastic matrix in order to achieve a particularly high tensile or compressive load capacity in a specific direction. This is because maximum resource efficiency is achieved through reduced material use with optimum fibre utilisation (fibres directed as far as possible in the load direction) and during vehicle operation through reduced weight. CFRP with thermoplastic matrix also have other advantageous properties: they can be easily and cost-effectively formed and combined with other materials to form hybrid materials.

As a new trend in hybrid technology, the combination of glass fibre reinforced plastics with inserts made of organic sheets, i.e. endless fibre reinforced semi-finished products with a thermoplastic matrix, is gaining ground. This material combination promises a particularly low component weight with high strength, rigidity and energy absorption. This makes them interesting for use in front ends. Further advantages are the high degree of design freedom and the comparatively low cost of production in the one-shot process – without post-processing. Compared to hybrid designs with metal inserts, the problem of corrosion is eliminated.

The 2012 market report of Carbon Composites e.V. (CCeV) stated a global annual demand of 37,000 tons of carbon fibers for 2011. For 2020, demand is forecast to be around 130,000 tonnes.
Of this 130,000 tons, about 42 percent will be accounted for by wind turbines, seven percent by aircraft construction and six percent by the automotive sector. This means that applications in the automotive sector – like the market as a whole – will grow by about 15 percent annually until 2020.

2011 was a record year for the German automotive industry, with almost 5.9 million passenger cars produced, more than ever before. In 2012 domestic production fell by 8.1 percent to just under 5.4 million passenger cars. Although the industry was thus able to recover fully from the financial and economic crisis and the low point in sales in 2009, it was again dampened by the weaker global economy and the euro crisis in 2012. This development was primarily driven by demand abroad, as illustrated by the record level of 4.5 million exported vehicles in 2011 and the decline to a good 4.1 million in 2012.

The protection and preservation of our environment is a task for society as a whole. This also includes the reduction of emissions. Supposedly contradictory to this is the demand for individual mobility. After all, combustion engines are one of the main causes of mobility. Consistent lightweight construction and the new materials used in automobiles and in aviation can and will provide significant relief and contribute to a substantial improvement in the pollutant balance – alone or in combination with other, established materials.